We regularly talk to inmates in prisons across the UK – to discover what life is really like behind bars. Our team recently spoke to a prisoner at Highpoint Prison about his experiences there; and in particular, we learnt about the situation with illegal substances, not to mention the poor conditions, within the establishment. Read on to find out more.

From Lowdham Grange to Highpoint Prison

Initially, the inmate in question (who wishes to remain anonymous) was incarcerated at HMP Lowdham Grange, which is a privately run prison. He was moved to Highpoint Prison and was astonished by what he encountered there.

As soon as he arrived on the induction wing, he found himself hounded by inmates, who wanted him to purchase or swap drugs for Tobacco. Drugs are plentiful in the prison, and as a result, they’re often used as currency to buy TOBACCO from other inmates. Given that the inmate was serving a 15-year sentence for conspiracy to supply Class A drugs, being confronted with this was the last thing that he wanted. He asked us to emphasise that, despite his past crimes, he’s never been a drug-user himself.

The day before the canteen items are delivered our source said “I’m being offered 1 joint for 5 rizla papers as inmates are desperate for the means to roll more joints. The drug problem here is out of control.” 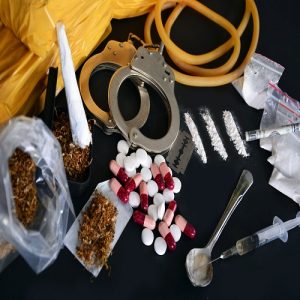 Our source also reported that ‘everything’ within HMP Highpoint is either damaged or broken; and described the premises as not fit for human habitation. He even went as far as comparing the building to a ‘prison you would see on TV in Mexico’ – filthy and unfit for purpose.

When assigned a cell, the inmate in question found himself placed with a smoker, despite informing prison guards several times that he didn’t smoke. There were no pin phone forms, which meant he was unable to add the telephone numbers of his loved ones to his approved phone list. Understandably, this made him feel isolated, vulnerable and pessimistic about the future.

HMP Highpoint is one of the country’s largest prisons, with a capacity to hold 1,323 inmates in total. Perhaps as a result of its size, the prison has struggled with drugs problems in the past – notably when a prison worker was caught smuggling drugs to inmates in 2012.

The following year, the prison came under scrutiny again for its drugs problem, as it was revealed that other incidents of drugs smuggling had occurred. However, the HM Inspectorate of Prisons praised HMP Highpoint for its ‘proactive’ approach to the problem – and Nick Hardwick, then chief inspector of prisons, commented that it was a ‘generally safe and decent environment.’

Interestingly, the same report also highlighted the ‘noticeably poor’ visiting arrangements – reinforcing our source’s statements about being unable to contact his family.

In May 2016, five prison officers were taken hostage by a prisoner holding a double-bladed weapon – the second such incident in a month. In response to the situation, Andrew Selous, the Prisons Minister, commented: “Our prison system needs reform, which is why we are giving governors greater freedoms to innovate to find better ways of rehabilitating offenders. We have to ensure prisoners can be rehabilitated so they are no longer a danger to others.”

What is the Solution?

There should never be a situation in a UK prison where drugs are offered freely to other inmates – without any intervention from prison guards. This is a worrying state of affairs and needs to be addressed as soon as possible.

Also worrying is the lack of contact that the inmate has with his family. Regular interaction with loved ones is a vital part of the rehabilitation process – providing the prisoner with something tangible to focus on whilst serving their sentence. Being able to talk to family and friends also helps reduce feelings of isolation and depression.

We hope that HMP Highpoint will address these issues quickly, and focus on improving standards within the prison.

PrisonPhone offer a range of cheap tariffs – enabling inmates and their loved ones to stay in contact much more easily. To find out more, simply visit our website.

[vc_btn title=”Click here to find out how we can save any HMP Highpoint inmate 75% on their calls!” color=”vista-blue” align=”center” i_icon_fontawesome=”fa fa-phone” link=”url:http%3A%2F%2Fwww.prisonphone.co.uk%2Fplans%2F||” add_icon=”true”]