The post below is to keep you up to date with the Andrelle Leedham case we have been following. 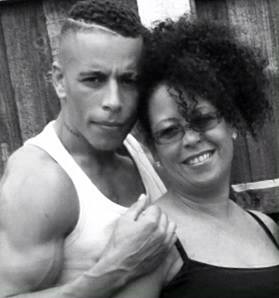 Andrelle leedham posing for a picture with mum.

On Friday 7/11/2014 before his court appearance I spoke with Andrelle  who believes he has been used as a scapegoat by Hanna Stewart to protect the person she tried to smuggle a package containing 7 mobile phones and drugs into HMP Featherstone for.

Unfortunately the jury did not agree!

They unanimously found Leedham,  guilty of conspiring to supply cannabis and anabolic steroids and conspiracy to convey prohibited articles into HMP Featherstone.

Recorder Cooke said: “He inveigled his way into her affections and was manipulative. He was threatening to turn up on the doorstep of her family and announce what had been going on, which would not have gone down well with her father and brother.”

Leedham was remanded in custody and will be sentenced with the two inmates also involved in the plot at a later date.

Posts written on Andrelles Facebook page after the verdict are all in agreement that they feel this is a terrible miscarriage of justice.

“This system is wrong!!!! She abused her position, END OF!!!! Free Andrelle Leedham”

“I absolutely could not believe it when Peter told me.    Unfukkingbelievable.  That is one fukked up justice system if you ask me.  Obviously there are a whole lot of people that love you and are on your side.   Wishing you and your family strength and patience in the days to come.  Especially patience as you deal with the BS.  Sending you all our love from 5000 miles this direction”

Just to quote a few of the many many messages of support being left for him!

Hanna Stewart, who is on bail, will learn her fate at a separate hearing, however after admitting her involvement in the conspiracy and being caught smuggling the package into the prison I very much doubt she will be enjoying her freedom for very long.

I will keep you updated as and when Leedham is sentenced and also when we hear about Stewarts trial date.

Here’s a few links for you to see what the papers are saying!