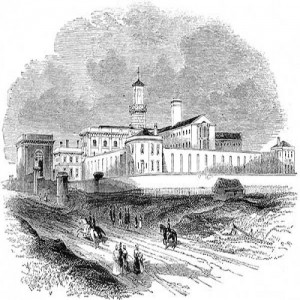 One of the UK’s more sizeable prisons, HMP Pentonville accommodates up to 1310 category B / C inmates. It’s one of London’s most well-known prisons – not least because it was officially the first ‘modern’ prison in the country.

Here’s some more information about Pentonville Prison, and some of its more notorious inmates.

Pentonville Prison, built in 1842, was one of the first to feature a panopticon design. In simple terms, the panopticon layout meant that all cells were built around a central area – enabling an observer to be able to see into any cell they chose at any given time. This meant that inmates could technically be under observation at all hours of the day – which (in theory) meant that they would start to regulate their behaviour accordingly.

In addition to this, Pentonville’s cells were single, ensuring all inmates were placed in solitary confinement. This design became the standard for the UK prison system, and in the six years that followed, 52 new prisons were built following this template.

Although Victorian reformers claimed that rehabilitation was a top priority, this certainly didn’t mean that things were easy in HMP Pentonville. In addition to being kept in solitary confinement and watched continually, inmates were forbidden to speak to one another. When out in the exercise yard, they were made to cover their heads with cloth masks to prevent communication. Even when in the chapel they were forced to sit in separate cubicles.

Perhaps unsurprisingly, cases of insanity were high in the prison. A report suggested that “for every sixty thousand persons imprisoned in Pentonville there were 220 cases of insanity, 210 cases of delusion and 40 suicides.” However, it was generally acknowledged that conditions were far better than at nearby Newgate Prison – and that at least inmates were given meaningful work to do.

It wasn’t until Newgate Prison’s closure in 1902 that HMP Pentonville became a site for execution. Purpose-built condemned cells were added, in addition to a specialist execution room. A few famous people to be executed at the prison were Roger Casement, an Irish revolutionary, and Udham Singh, who shot Sir Michael O’Dwyer in the Amritsar Massacre.

The last person to be executed at HMP Pentonville was Edwin Bush, in 1961. He was just 21 when he died.

In recent years, Pentonville Prison has come under considerable criticism for poor living standards and high levels of violence. A 2014 report issued by Nick Hardwick (then Chief Inspector of Prisons) suggested that the prison did not have a viable future, unless significant refurbishment and improvements took place. A report the following year indicated that conditions had worsened; with piles of rubbish on the floors, lack of basic provision for inmates, and cockroach infestations. 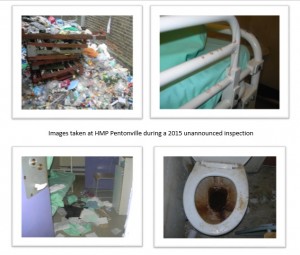 An article including some shocking photos of inside HMP Pentonville can be seen here;

When asked to comment, Frances Cook, Chief Executive of the Howard League for Penal Reform, said: “When a prison is asked to hold 350 more prisoners than it is designed for, we should not be surprised when it fails.”

You can see the rest of the statement here: