How Many Transgender Prisoners are there in England and Wales?

How Many Transgender Prisoners are there in England and Wales?

There are currently around 70 transgender prisoners in 70 of the 133 jails in England and Wales. Transgender people who are kept in prisons that are not reflective of the gender with which they identify often become victims of verbal abuse, misogyny, physical and sexual assault and rape. They have reported poor healthcare, being inappropriately placed in solitary confinement for their protection, sexual exploitation and misogynistic comments. Following a series of deaths of transgender inmates, a report by the Women and Equalities Commission identified a “clear risk of harm” when transgender prisoners are not kept in a jail which fits their acquired or affirmed gender.

Deaths and Hunger Strikes in Prison 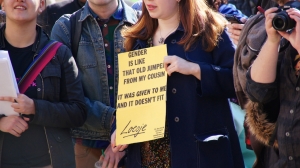 Marie Dean, a transgender woman in a male prison, has gone on hunger strike in protest against the Ministry of Justice’s refusal to accept the gender with which she identifies. Dean was placed in HMP Preston following convictions for various offences including voyeurism and burglary. In a letter to a friend, she said she would rather die than be denied her chosen gender.

According to current guidelines, all inmates must be allowed to express the gender with which they identify during their time in prison. But a prisoner can only be placed in a jail which does not correspond with their legal gender after a Transgender Case Board, and must provide evidence of living with their chosen gender.

A recent review by the Ministry of Justice found that the treatment of transgender people by the courts, probation and prison services had not kept up with the progress of society’s attitude and understanding of gender issues. The Prisons and Probation Ombudsman has called for prisons to be more flexible in the way they treat transgender inmates.

Last year, Theresa May announced that she would reform the gender recognition act to allow people to identify as male or female without officially changing gender or a medical diagnosis of gender dysmorphia.

Ministry of Justice Under Scrutiny

Transgender activist Tara Hudson is suing the Ministry of Justice after spending six weeks at HM Prison Bristol, a male-only jail. She alleges that she was the victim of sexual assault and was subjected to an atmosphere which was “intimidating, hostile, degrading, humiliating and offensive”.

When Hudson was sent to Bristol Prison for headbutting a barman, a petition calling for her to be moved to a women’s prison was signed more than 150,000 times.

Hudson’s lawyers have criticised the “transphobic and insulting” language used by the government in response to the allegations, including their insistence that Hudson is “as a matter of biological fact a man”.

“They should accept they mistreated me and move forward rather than aggressively fight me,” said Hudson. “It’s shameful when really they should be trying to make sure a trans person is not mistreated.”