Inmates Advised on How to Take Deadly Illegal Drugs ‘Safely’

Inmates Advised on How to Take Deadly Illegal Drugs ‘Safely’

Inmates at a Salford prison have been handed leaflets advising them on how to take dangerous illegal drugs ‘safely’. The pamphlets, which are given to prisoners when they receive orders such as toiletries and cigarettes, offer 11 ‘safety rules’ for taking new psychoactive substances.

The leaflet warns inmates not to take psychoactive substances, which were outlawed last year. But it goes on to detail various ways to use them safely – including starting with a small amount and chopping them to a fine powder.

‘Don’t Believe Everything You Hear’

“Get information before you use,” reads the first tip. “Ask around but don’t believe everything you hear.”

The leaflet warns prisoners with health conditions against using psychoactive substances, and suggests that anyone who decides to use drugs in prison should “start with a really small amount” and wait for at least an hour before deciding whether to take more. 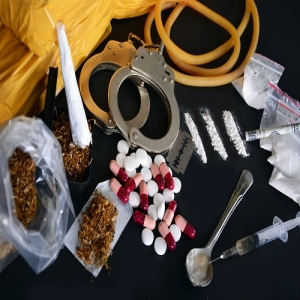 Psychoactive substances should only be snorted once they have been chopped to a fine powder, according to the pamphlet, and they should be taken with others, in a “safe environment”.

A former-inmate recently released from Forest Bank Prison, in Salford, said the leaflets were regularly handed out with prisoners’ ‘canteen’ – the name for the stamps, phone credit and other goods which they can order.

“We have security policies in place and our staff work really hard to keep drugs out,” said a Forest Bank spokesperson. “However, the reality is drugs are an issue in prisons and we have a duty of care to our prisoners. Therefore, we provide advice and support to reduce levels of harm in the prison.”

Naked Prisoners Pretending to Be Dogs

Until they were banned last year, new psychoactive substances mimicked the effects of illegal drugs, such as cocaine and cannabis, without falling foul of the law – hence their nickname ‘legal highs’. The Psychoactive Substances Act made it a crime to produce, supply or import them for human consumption. The use of synthetic cannabinoids, including Spice, has become particularly widespread in prisons.

An investigation was launched after leaked footage showed violence and humiliation at Forest Bank after inmates used Spice – including naked prisoners pretending to be dogs. Serious health issues, including difficulty breathing and psychotic episodes, have been linked to Spice, but demand in an outside of prison remains high.

The problem of drugs in prisons was highlighted by a recent Panorama documentary by the BBC, which showed inmates threatening staff and overdosing – and an officer being taken to hospital after inhaling Spice fumes at HMP Northumberland. In a recent piece for the Independent, David Scott, senior criminology lecturer at The Open University, argues that the only way to tackle drug use in jails is to dramatically reduce the prison population. 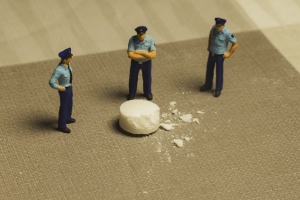 “About half of the prison population at any time (45,000 people) have regularly taken drugs prior to imprisonment,” he says.

“Promoting non-violent community alternatives to prison time that can meet the needs of people using illicit drugs, such as residential therapeutic communities, would remove from the system a lot of people who currently are needlessly incarcerated for drug offences.”