Recently, we featured a post detailing what the first night of a prison sentence is really like. However, the article focused entirely on male prisons, and didn’t cover women’s prisons at all.

This is hardly surprising. After all, going by the Howard League for Penal Reform’s latest figures, there are currently 85,993 people in prisons and YOI in the UK. The male population count for 82,064 of them, the females, just 3,929. In short, the vast majority of this country’s prisoners are male. However, we feel it only fair to provide an outline of what female inmates experience on their first night in prison too. As you might expect, the experience is somewhat different. 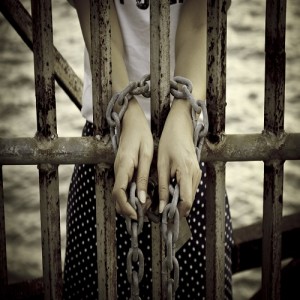 We were recently fortunate enough to speak to Alison, an ex-inmate who had been incarcerated in both HMP Bronzefield and Holloway – two female prisons in the UK. Of course, the reputation of HMP Holloway is formidable, and recently, interest has surged in the prison, thanks largely to Channel 5’s interesting documentary on the prison and its more famous inmates. (The documentary named ‘Inside Holloway’ can be seen here)

But what is it really like, when you first set foot in a women’s prison? Here’s what we learnt.

Arriving at the Prison

We were informed that initially, women are taken to a local prison (such as Bronzefield or Holloway prison) rather than one of the longer term prisons, as this is where most will serve the first part of their sentence. It’s also where you’re incarcerated if you’re on remand and awaiting trial.

Alison told us that the journey to the prison is often very uncomfortable. The vehicles, referred to by prisoners as ‘sweatboxes’ come with drivers who ‘usually drive like lunatics, so you will be violently thrown around your cubicle.’ It’s common to be sick on the journey, though you can expect to be offered a sandwich and a drink by staff.

Upon arrival, you will be interviewed by a volunteer or prison officer. If you’re feeling depressed, it’s important to raise it at this point, as they will then commence the ACCT process, which is designed to provide the inmate with support. You’ll also get a five minute phone call, to let someone know where you are.

In the initial registration process, you’ll also see a nurse and have the chance to discuss your medical history. We were told that you should ‘tell them everything, because prison healthcare is notoriously bad, and if you have problems, keep telling them.’ It’s also vital to tell them if you have a life-threatening condition, though you won’t be given any medication at this point, because you won’t be permitted to see a GP until the following day at the earliest.

You’ll then have your photo taken for your ID card. Our inmate emphasised the importance of not losing or breaking the card, as ‘you will need it every day for just about everything and there’s a hefty charge to replace it.’

You’ll also have most of your property taken away from you, which will be stored at reception until you leave. You might be issued with prison clothing, depending on the prison you’re at.

Thankfully, women are no longer automatically strip-searched, but inmates can expect to be patted down. You’ll also have to sit on a ‘boss chair’ which checks to see whether or not you’re carrying any contraband in any orifice, and you’ll also be checked over with a metal detector.

Alison had some useful tips about getting through your prison sentence.