HM Prison Pentonville, also known as ‘The Ville’, is a category B men’s prison run by Her Majesty’s Prison Service. It is located in north London and has a capacity of 1,256. The jail has recently been criticised for squalid conditions and soaring levels of violence. According to inspectors, Pentonville will remain a soft target for the smuggling of drugs and other contraband until the dilapidated Victorian building is refurbished.

Built in 1842, Pentonville was London’s first modern prison. It operated the “separation system” with a central hall and five radiating wings with cells for 860 inmates. Prisoners were not allowed to speak to each other and walked in silent rows while exercising. Mental health problems were common and an official report admitted that “for every 6,000 persons imprisoned in Pentonville there were 220 cases of insanity, 210 cases of delusion and forty suicides”.

It was reported in May 2018 that assaults at Pentonville Prison had risen by 92 per cent in five years. 125 of the 524 assaults recorded in 2017 were on staff and 89 were described as ‘serious’ – a category which includes sexual assaults and those which require hospital treatment. Frances Crook of the Howard League for Penal Reform called soaring levels of violence in prisons a “national emergency” to which the government must urgently respond. She said: “This shameful rise in violence and self-injury is the direct result of policy decisions to allow the number of people behind bars to grow unchecked while starving prisons of resources.”

Blocked toilets, leaking sewage and dilapidated windows were discovered during an inspection of Pentonville Prison last year. A report by the jail’s independent monitoring board said an audacious attempted escape by two inmates and the murder of another demonstrated “serious shortcomings”. The report said: “Confining two men in a cell measuring 12 feet by eight feet is not humane treatment. One has to eat his meal in the cell while the other may be sitting on a badly screened toilet a few feet away. Inspectors criticised Carillion, which maintains the prison, for “struggling to ensure the basics of decency” and concluded that the contract with the company was working for neither the jail nor the taxpayer. 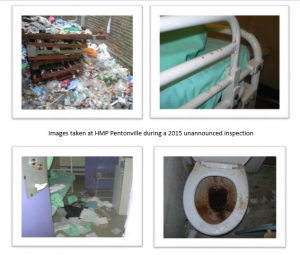 Man Jailed for Trying to Smuggle £23,000 worth of Drugs into Pentonville Prison

Joshua Lewis was sentenced to 27 months behind bars in April 2018 for attempting to smuggle MDMA, cocaine, cannabis, psychoactive substances and mobile phones into Pentonville Prison. He was caught when officers noticed a string dangling from the prison wall to the ground below. When they saw Lewis approach the string, he managed to escape on foot but was later identified by DNA on his phone, which he dropped. Insp Steve Murfin, from Islington police station, said: “This individual was found to be carrying a substantial amount of controlled drugs and phones. Due to the vigilance of officers, it was prevented from entering the prison.”

In March 2018, it was reported that Pentonville Prison had banned inmates from smoking as part of the introduction of a smoke-free prison policy across England and Wales. The prison tweeted: “Another historic milestone as Pentonville goes non-smoking from today.”

The ban was announced in 2015 and piloted in 21 prisons in Wales. Roughly 80 per cent of the prison population smokes and experts have warned that depriving inmates of their right to smoke could lead to unrest.